This group was formed by Baobab evictees Lekhsmi, Bernard and Elsa with two Baobab males; the males left again, and ex-Axolotls male Drachentöter (a.k.a. Stumpy) joined the females. They did not manage to raise any pups, and Drachentöter left them in early 2016 to join Rascals. In May 2016 however they were joined by Van Helsing male Willy – who soon left them for something bigger: Baobab. They are currently down to two females, Lekhsmi and Bernard.

In 1998 Vivian females and wild males combined to start a new group that rapidly grew. The original dominant female Splash and dominant male Kine were killed by predators, but the group has very successfully reestablished after being reduced to 7 meerkats all under 18 months with the then 11 months old dominant female Yeca. She and the dominant male Spofl were also predated, and the group was then headed by Blondie. All Rascals males dispersed after the immigration of Frisky males, and a succession of wild males, of which Grus and companions eventually stayed. The group barely grew over a long time, but a litter of six pups boosted their numbers. Female dominance switched twice, to a young female, Sancerre. She and Grus brought the group back to its former strength, growing it steadily over the years. The break came with the drought of 2013 that changed many of our groups: Grus died, probably of old age, and several adult males joined Kung Fu, leaving Rascals without a dominant male for several months until Gooch established dominance. Later that year, Sancerre disappeared, at the end of a pregnancy, without a trace. Edna May became her successor as dominant female, and she was joined by Kung Fu male Hankson as new dominant male, while Gooch was away roving. One month later he was replaced by Ewoks male Lorax. He and Edna May cemented the group’s stability until Lorax succumbed to a snake bite in 2015 – leaving the dominant position again to Hankson. He soon was displaced by Bruce, who however succumbed to TB and was followed by rover Drachentöter (a.k.a. Stumpy) as a dominant male.

The Rascals dominant females have a reputation of winning all weights records when pregnant – both Sancerre and now Edna May regularly exceed 1000 g before giving birth.

The Rascals live south of the main road on farmland. 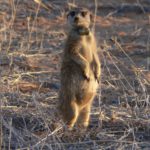 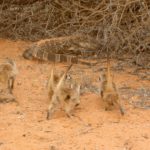 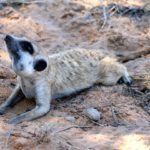 The Quintessentials are a group formed in January 2014 by Ewoks evictees Truffula and Barb-a-loot, with two very wild males. One of the males disappeared, so European Bob was dominant by default. They had several litters, Truffula eventually became dominant and the male’s habituation was improving considerably. He succumbed to the 2015/2016 drought, however. In early 2016, the group exchanged three males with the Zulus group, with Pi becoming dominant at Quintessentials. Soon after, Truffula was predated and the oldest remaining female Bernice became dominant. An IGI with Zulus shook the group structure though, and the group currently consists of Bernice and a subordinate female.

The Quintessentials have their home North of Big Dune, towards Ooh Dam, and their closest neighbors are Zulus.

Pandora was a rather coincidental addition to the list of monitored groups. One day in June 2011 the four Aztecs females were Aztecs, and the next day they had formed a new group with four Van Helsing rovers. Luckily they used a burrow just next to Aztecs (and the Gannavlakte farm house) and thus remained in the population… Female dominance took some time to settle between the two littermates Snowflake and Toblerone, with the latter having the upper hand. The males initially roved a lot, but finally the group got more cohesive. Pepper eventually took dominance, with Cecil remaining a prime rover. All males eventually disappeared, however – due to TB or unknown causes, so that the position of dominant male was free for a group of long-lost Van Helsing male Mr. Jacky and three wild males to take. Toblerone was predated at the same time, with Snowflake inheriting her position. Not for long though, as she was bitten by a snake, and Molly, the last of the founder females, followed as dominant female. In their first year of existence – that was dominated by a severe drought – Snowflake and Toblerone could only raise two pups to adulthood, but Molly and Shosonna produced three successful litters in 2014. Male dominance kept changing, and it was down to the two wild ones when one of them disappeared, leaving Bibbiddi dominant. In August 2014, Molly was predated, and Shosonna has since risen to dominance. Three Baobab males led by Mr. Lahey immigrated later that year. They were displaced by wild males in January 2016, of which Mr. Holmes became dominant.

The Pandora territory is on Leeupan farm, east of our Gannavlakte farmhouse, in the riverbed on both sides of the main road. 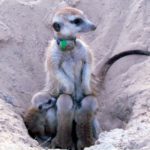