Nematoads were added to the groups list thanks to the dispersal project that followed evictees past their eviction: Lazuli females Bernie, Fran-the-Wu-Man and Sutica formed a new group with Baobab male Crusty and a wild male, in January 2014. They started raising litters, and with the wild male gone, were soon back to being a habituated group. The two subordinate founder females left the group in 2015 to form the short-lived Xhodes group. Unfortunately, Crusty was predated in August 2015. The other adult males emigrated, and a wild male joined the group. Both the male and dominant female Bernie disappeared in early 2016, during the drought. The remaining three females were joined by three Quintessential and two wild males. Two wild males now remain; Indiana is the dominant female right now.

They are located West of Lazuli and Baobab territory, in a beautiful remote area that didn’t use to form part of the monitored area.

‘Lazuli’ was the second of the famous Avatar sisters (the others being Ziziphus, Igraine and Morgause), who founded the Lazuli group together with Belgarion, a wild male of unknown origin, in 1995. However, soon after the group formed Ziziphus took the role of the Lazuli dominant female. Her daughter Grumpy was dominant in Moomins, her granddaughter Aretha headed Lazuli, and her grandson Osprey led Drie Doring until his death.

Lazuli was without a non-natal dominant male for more than two years, after Basil and later Cazanna died of TB. Lazuli were for almost three years led by brother and sister, J. Alfred Prufrock and Aretha, but the Lazuli females were well frequented by roving visitors… Aretha died after a predator attack, and Young, the oldest and strongest female, took over dominance. The Lazuli males were replaced by a group of Whiskers males. Wollow seized male dominance. After a snake bite, Wollow was deposed by Rufus as dominant male but Wollow initially remained in the group. After dominance squabbles in 2011 Rufus settled as the dominant male. The group grew steadily due to Young’s prolific births but also due to the fact that subordinate females occasionally managed to bring a litter through; furthermore the group remained free of TB for several years. The drought of 2013 brought a major change: it took Young, and all pups. Christiana followed her as the Lazuli dominant female. Soon after Rufus was lost, probably predated by a martial eagle. Six males then emigrated to Zulus, making room for Baobab male Bumpy, who was soon ousted by three wild males. Their habituation level improved at high speed, so that the group was soon back to full habituation. Jazzy Jeff initially won male dominance, yet he was dethroned by LL Cool J in 2015. In early 2014, three females emigrated to form the Nematoads group. Sadly, Christiana died soon after, heavily pregnant, so JubJub Bird is now the dominant female. It was not only her though who intended to lead this small group back to their former glory, as she hasn’t been overly prolific; several successful litters are from subordinate female Alan Johnsons Beamer.

The Lazuli live in the center of the reserve, north of the Kuruman riverbed in the Elveera flats.

They are available as a Friends group. 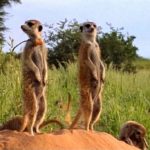 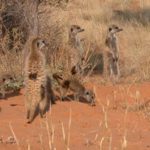 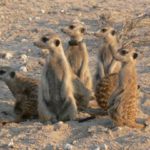 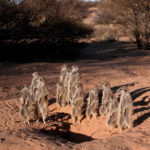 A group first seen in May 2008, formed by two Lazuli females who dispersed in December 2007, and a Hoax male who dispersed in October 2007. With them were two juveniles. The Hoax male was then displaced by two wild males. The group was led by Diana, and grew steadily, until Vince the dominant male and several other members disappeared one by one, probably due to predation. Kori, a natal male, eventually established dominance in 2010. The group’s numbers increased, mostly due to Diana being so prolific – only two litters in 5 years were not her own. July 2013 saw a major change with the natal males, including Kori being displaced by four wild immigrants. Only one of them, Guinness, remains with the group today, as the dominant male. Diana also started to slow down with pregnancies, probably due to her age, and allowed her daughters to have litters. Tragedy struck in August 2014 when Diana was predated, 9.5 years old and in the late stages of pregnancy. Her three oldest daughters were at the verge of forming an evictee splinter, but returned and Teahupo’o took dominance, despite the fact that CheesyPuff was her senior by two years. The three females kept fighting, until Cheesy Puff was predated in July 2015. In early 2016, five males emigrated to join Ewoks.

The group lives on Heights farm, South of the main road. Their territory overlaps with an ostrich farm, so they often can’t be visited – due to the risk of an ostrich attack on a volunteer. 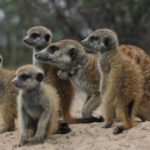 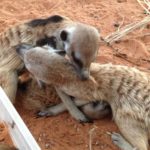 Ash (top), Koda (showing his back) and Poletje (hiding underneath somewhere), of the Jaxx group. 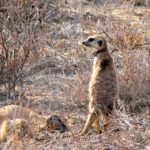 The Ewoks were founded by evicted Kung Fu females and former Rascals and Colombians males. Dominant female McDreamy evicted the subordinate females during her first pregnancy and they dispersed; she remained the only adult female for a long time. Her first litter was killed in a burrow raid by Kung Fu, but after that the group has been growing steadily. McDreamy managed to raise four successful litters in one breeding season. Tigi’s place as dominant male remained unchallenged, yet Lorax, one of the oldest Ewoks males, won dominance at Rascals. Ewoks were the probably the most successful group during the 2014/2015 drought, since they were the only group whose dominant couple remained in place. An era ended though when McDreamy was found dead in January 2016; she had fallen victim to the more severe 2015/2016 drought. The oldest daughter Edzna took over dominance. In February, a group of five Jaxx males displaced the Ewoks adult males including Tigi, with Kazeh winning dominance.

Ewoks’ mark are the bent or short tails some of the pups sport – probably inherited from kinky-tailed Tigi.

The Ewoks lived south of the main road next to Kung Fu and Rascals, on the rolling red dunes, but recently moved into a bleaker territory closer to the Heights farm, where they now border Whiskers. 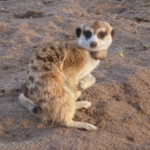 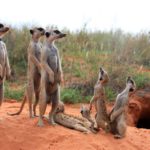 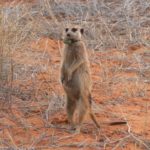 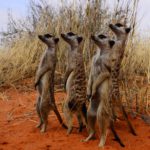 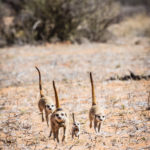