X-iles formed in 1997 when Lazuli females and Vivian males combined, soon to be expanded by the immigration of wild males while the Vivian males were roving. After several dominance changes and a lot of roving, the Vivian males were ousted by wild males, one of which showed signs of tuberculosis. Most of the group died of the disease within a year, and the few splinters were no longer followed.

Vivian and her first litter

A single semi-habituated female named Vivian formed this group located at the current project farmhouse in 1995. She combined with a Drie Doring male and established a family. After the death of the first dominant male, Young Ones male Stinker immigrated and held dominance until the death of Vivian in 2000. He remained but later emigrated to take dominance of Gattaca. From 2000 onwards, the Vivian family was lead by Vivian’s daughter Rhian, and a succession of males of Young Ones and later wild males. The emigration of males, to the Whiskers, Gattaca and Balrog groups, but later also disease, decimated the group. Despite the immigration of wild males after the death of long-term dominant male Jim Bob, the group slowly dwindled, and was last seen in December 2007.

Vivian’s sons and daughters took the Vivian blood-line to many other groups, making Vivian the ancestor of several later group leaders, including Vivian itself, Whiskers, Gattaca, or Young Ones.

Vivian inhabited a territory in the Southern part of the reserve and across the road, not far from our farmhouse, but also spent the time of drought in a region at the Eastern end of the monitored area.

The Vivian are available as a Friends group. 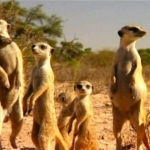 Rhian (pregnant) with the Vivian group, 2005 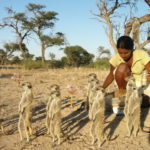 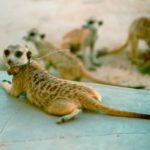 Vivian and her first litter

The Urukhai were a short-lived splinter of Baobab led by Cruise and Al Catraz, formed in December 2009. All individuals returned to Baobab within a month.

Umbongo formed in 1999 from evicted Young Ones females with a few tag-along pups, and two Frisky rovers. The day they met, the males were seen feeding the pups. After several dominance changes due to predation, the group rapidly dwindled due to disease, and was lost.