Drie Doring was one of the first wild groups the KMP habituated at the start of the project in 1993. From July 1995 until December 2005 they had one dominant female named Mabili (‘villain’ in Sotho). Born in November 1993, Mabili had 22 surviving litters and 79 surviving pups in her ten year reign. She was unable to continue breeding at this prodigious rate and over the latter years group size dwindled to the small group of meerkats headed by Mabili’s daughter Makonkie who took dominance from her mother in 2006. After the disappearing of the long-term dominant male Osprey, natal males acted as dominants. Makonkie was predated in fall 2008, and her daughter Mist has been leading the Drie Doring since then. There was a succession of natal males – amongst which was Finn Mac Cool, a very eccentric male – but rovers, mostly of Frisky origin, were frequent guests. A group of Drie Doring males immigrated to Frisky, with Drie-born Falco as a dominant male. Back home, Captain Planet assumed dominance. He and the other natal males were ousted when a group of four very wild males immigrated in October 2013. Only one of them, T-Bone, remained and became dominant – requiring a long but eventually successful re-habituation of the group. In March 2015, Mist was taken by a raptor, and her daughter Parmesan took over dominance. T-Bone and the other males were ousted two months later by a group of Baobab males led by former dominant Butch. Late in 2015, a first Drie member developped TB symptoms, and dominant Parmesan was soon to follow. The following months brought a rapid decline, and the group dwindled one by one, until the last collared animal died of TB. One individual, Baobab-born Goldeneye, remained in relatively good health, but he could no longer be tracked – so this marked the sad end of the 22 years of Drie Doring history.

The Drie Doring were famous for their playfulness and their good looks – it was the Frisky blood they say – and their high percentage of female pups, usually of ginger color. Most famous among them were Lucifer with his pale orange fur or Patch who wore a maroon patch over her eye.

‘Drie Doring’ is the Afrikaans name for the ‘Three Thorns’ shrub (Rhigozum trichotomum) which covers a big part of our reserve and is often used as a sentry post by meerkats. The Drie Doring group’s range was south of the Frisky territory of old, on the Heights farm. After the demise of Frisky, the Whiskers took their territory next to Drie Doring.

The Drie Doring are available as a Friends group. 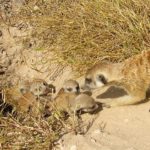 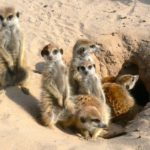 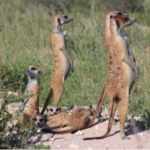