Elveera was founded by individuals of the old semi-habituated Phantoms group in 1996, but later were fortified by Drie Doring and a Vivian male.  The group was initially headed by the dominant female Tenuvial and Silks, the first male born in Vivian group. For years after, the family was led by Eleusine, who had been one of the first Elveeras, until she was taken by a Cape cobra in 2005. Soon after, the dominant male (and Eleusine’s nephew) Dante was lost. Her daughter Jo Jo Hello followed her as dominant female, and Habusu, a young Young Ones male took Dante’s place, until he was displaced by his brother Teabag. Habusu and several subordinate females dispersed. In early 2009 the first case of TB was observed in the group, and the remaining members succumbed within half a year. Elveera used to live North of the riverbed where the Elveera plain was named after them, but they later moved South, foraging South of the main road on the Heights farm.

The Elveera/Phantoms are available as a Friends group. 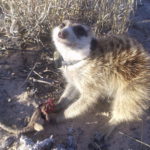 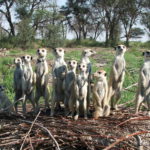 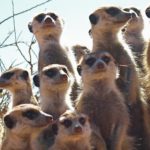