Frisky formed in 1999 when females from Young Ones met with wild males. After initial dominance changes, Jubulani (“celebration” in Sotho) was the highly prolific dominant female of the group for many years; Frisky hold the record as largest group ever, counting 49 in March 2002. After the wild dominant male at Jubulani’s side died she joined with Young Ones males. When Jubulani died her daughter Frascati established dominance for two years. Her daughter Bootle became dominant after her, a new wild male immigrated and was briefly dominant though he died of disease. After this a Drie Doring male, Gazebo, immigrated and took dominance. Several subordinate adult females dispersed with a group of Drie Doring males.

After the loss of Bootle, her daughter Quaver took over dominance, alongside Gazebo. In 2011, a group of Drie Doring males immigrated, and Falco took male dominance. The group was hit hard by tuberculosis; it got quiet until Quaver had to be euthanased in June 2012. Muscat became her successor, but her reign was not to last: in December 2012, Drie male Andy C immigrated and dethroned Falco. Then all subordinates roved away, or went missing. And at the end of the month, two Kung Fu evictees immigrated, evicted Muscat, and went on to invade the Goodfellas group – thereby bringing Frisky’s glorious history to a sad end. Muscat was observed occasionally after this, but eventually was lost.

The Frisky range was South of the main road, on the Heights farm, neighbouring Drie Doring.

The Frisky are available as a Friends group. 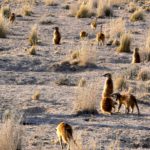 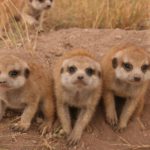