Kung Fu was formed in October 2007, as a motley group consisting of two Commandos females, two Whiskers males, two wild males, and one Frisky male. Kleintjie (of Gattaca origin, recently Commandos) and Ningaloo (of Whiskers origin) established dominance, over time. All adults but the dominant couple emigrated again. The group grew consistently though, and Kleintjie even gave birth to a litter of seven. Several older subordinate females were evicted, and formed the Ewoks group, led by McDreamy. The Kung Fu remained one of the more quiet groups, life-history wise, with a regular routine of births, but not a lot of drama – apart from the fact that “Klenky” and the Kung Fu starred in the Meerkats 3D movie. The start of tougher times was marked by the disappearance of long-term dominant male Ningaloo who went missing – possibly predated – in November 2012. Neighbor’s Rascals male Crux took over as dominant male after several of the natal males went roving. The group took a severe beating in numbers in July 2013 when nine subordinate females left to form the Friksarmy group – leaving Kung Fu with five members. Only one month later, Kleintjie died – probably due to the drought and her old age – and dominant male Crux followed a month later. The remaining female, granddaughter Cronenberg, became dominant by default, and five males with Van Helsing and Sequoia background immigrated – just two of them stayed for good, dominant George Michael and rover Priscilla. A wild female briefly joined them and assumed dominance, and she and Cronenberg had a mixed litter of eight pups, but the wild female was probably predated. Cronenberg managed to pull two pups through – keeping the meerkat count of this once-mighty group at a minimum of five – and soon gave birth to a new litter of four. However, her health quickly deteriorated in August 2014 and she disappeared. Seven months old Starbuck assumed dominance, yet the group unfortunately met its end when both she and the other remaining female had to be euthanized due to TB in November 2014. George Michael also succumbed to TB whereas Priscilla has probably emigrated to a wild group. Three remaining young males kept roving in the population, until the oldest one died of TB in March 2015, and the remaining two were too young to wear a collar.

The Kung Fu lived near the riverbed, in the center of the reserve, but gradually moved south of the road. Their closest neighbors were Rascals. 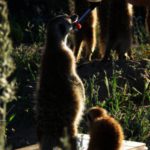