Nomads were started by two Elveera and a Zappa female who had been living in Elveera since she was a pup. This splinter had been evicted in October 2004 and was no longer followed until they were seen again in March 2005 with with two males from Drie Doring and Frisky, and nine offspring. They established well, but had frequent – and violent – group encounters with a wild group, and in mid 2006 the whole Nomads group succumbed to TB. 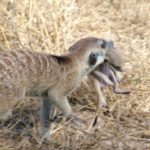 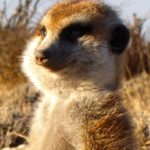