Shakespeare is born on 8th November 2002, in the second litter of the Whisker’s dominant female Flower. His father is most probably Zaphod, the dominant male at that time. His littermates are Mozart, Einstein and Freud. His sister Mozart remains with Whiskers as a subordinate – and often evicted – female before she founds the Starsky group. She is predated in 2007. His brother Einstein emigrates with Alexander to the Young Ones where he lives as a subordinate and rover. He is last seen in 2006. Freud is predated as a juvenile.

As a juvenile Shakespeare experiences a one-week group split. His first roving expedition to the Elveera, with four brothers, is led by his uncle Yossarian. Shakespeare starts to partake in roving coalitions, often with older brothers, or the experienced non-natal males Yossarian and Alexander. Their targets are usually the Lazuli females. However, as a young male, he also regularly contributes to babysitting and pup feeding duties.

On 23rd November 2004, Shakespeare is bitten by a puff adder while the whole group mobs the snake. The snake’s fangs hit his left cheek and left thigh. His state remains shaky for several days but then he seems to recover slowly, and resumes foraging. In early January 2005 he is part of a two-week group split including 23 animals, led by Yossarian and Baddiel (“Tosca”), but he returns to the main group.

By March Shakespeare has seemingly recovered from the snake bites, and has resumed normal foraging and pup feeding behaviour, though he is still limping. However, he has not yet started roving again when he disappears without a trace on 11th March 2005, after babysitting Flower’s youngest litter. Even though a similar meerkat is once seen foraging with a wild group a few months later, Shakespeare is never seen and identified again.

Shakespeare became one of the most famous meerkats in Animal Planet’s “Meerkat Manor” series, where he was known as courageous little Shakespeare. His unselfish dedication to the family, but also his miraculous recovery from the snake bite, which was actually filmed, created his fame, and we often receive inquiries about his whereabouts from people around the world who love him. 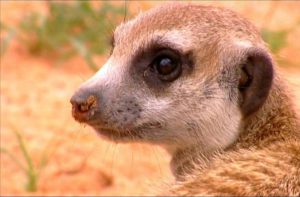 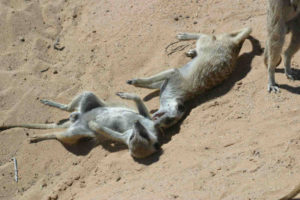