Young Ones belonged to the old groups. They were founded by Morgause and her sister Igraine, the two Avatar females, who teamed up with Drie Doring males in 1995. Morgause took charge of Young Ones until she died in 2004, while Igraine moved to found Frisky. Morgause’s offspring were exceptionally successful – for an explanation of why see the subordinate male Grog in Commandos who was Morgause’s last son: he was enormously big! Morgause’s sons and daughters were numerous, and became dominants of Young Ones, Commandos, Vivian. The name of Young Ones comes from a British student sitcom in the 1980ies with the same name.

Young Ones’ dominant female then was Morgause’s daughter, Asterix, until her  disappearing. She was never very prolific, but very effective in evicting her competition. The dominant male Alexander, a Vivian, recovered from a snake bite and reestablished dominance, but was found dead, after he and his sons were ousted by wild males. Two of his sons became frequent rovers at the Whiskers and Aztecs.

Young Ones lived in the region West of the farmhouse – and were in walking distance to the farmhouse. The researchers were unable to track the main group after November 2007, so they presumably left the monitored area. The group consisted of two habituated females, and four wild males, when they dispersed.

The Young Ones are available as a Friends group, together with Avatar. 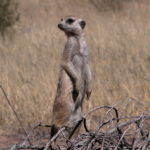 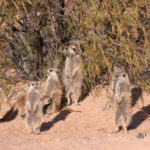 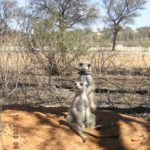 Young Ones’ Morgause and Sprite, 2003