Trackie-Daks (formerly known as Tswana 2) officially has a dominant male, adult Coquillette (VTSM014). In order to declare a meerkat dominant within a group, more than half of the individuals of the same sex within that group need to be observed submitting to that meerkat. 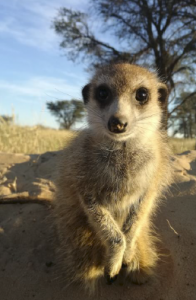 The morning of the 23rd started as a normal and fairly uneventful session at Make-e-plan. As per usual, the dominant female Bridget (VQLF011) and dominant male Banksia (VVHM117), subordinate adult male Thorn (VMPM027) and yearling subordinate female Vivienne (VMPF038) were taking their guarding duties seriously, while the rest of the group spent the morning foraging. Suddenly, the group started making a lot of noise around a dead tree. The observer approached the tree and saw a huge monitor lizard burst out and retreat into a hole.

If you want to know more….. download the meerkatter here!