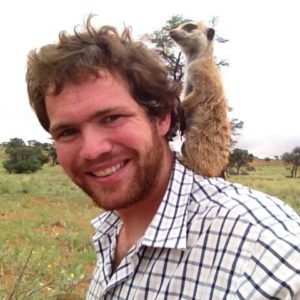 The first three months of the TB vaccination project have gone by at some speed, and have been a complete mixture of activities involving research, planning, and action. Having previously been familiar with the tuberculosis situation in cattle, I have spent a good deal of time reading up on the current knowledge base on tb in a range of other species. Relatively little is documented on this disease in meerkats, Dr. Julian Drewe’s previous work at the KMP being the notable exception, and so at this stage it felt appropriate to take a broad look across species and see what can be learned from others. Species of interest range from cattle and buffalo, through deer and boar, to possums, badgers, ferrets, and guinea pigs – a rather wide-ranging collection of species! I am particularly interested in how disease is believed to spread in these species, what diagnostic tests are available, and what work has been done to look at vaccination regimes. I have also been researching how the particular species of TB affecting our meerkats at the project fits into the family of infectious tuberculosis, the so-called Mycobacteria Tuberculosis Complex. A paper was published in the Journal of Emerging Infectious Diseases in December 2013, co-authored by Julian, describing Mycobacterium suricattae for the first time, based on samples exclusively collected at the KMP. Elements of the known structure of the bacteria relative to other members of the family are informative for deciding which tests may or may not be appropriate to try. The third strand of current literature based research is into the performance of vaccines against TB, and I shall be making an application in the new year for ethical approval to use a vaccine out here.

I travelled to Cape Town in late November and spent some time at Stellenbosch University with members of their TB department. This was a very informative experience, and opened my eyes to some of the work that is being done in South Africa on human infections with TB, as well as the animal situation. Dr. Sven Parsons at Stellenbosch, who worked with Julian on the M. suricattae paper, has agreed to work with me to develop an additional diagnostic test that we hope will better help us to diagnose TB more accurately and at an earlier stage than some of the current tests available. Such a test was one of my original aims for the project, and so it is exciting to see the first steps forward being made – I hope to have news on this in the coming months, and will keep you informed of any progress.

I moved on to the Kalahari at the start of December, and initially joined the team on any routine project captures to familiarise myself with the techniques currently in use. My intentions for this field season are to sample a broad cross-section of the habituated population in order to get an idea of the prevalence of TB both at the level of the whole project, and of the social group. This knowledge will help me to plan the next stage of my studies, as I will need to know which groups are carrying a large burden, and which are relatively free of disease. I am collecting additional blood samples to use in the diagnostic trials to be carried out at Stellenbosch. Cultures for TB will be carried out once I have finished collections this season, and can take three months to grow, so detailed results from this survey will not be known for a few months. As of Christmas, I have samples from 27 individuals spread across 8 social groups at the project.

In the past four weeks, I have only seen one individual showing clinical signs of tuberculosis, which is an improvement on the situation when I came over for a fortnight in August. Long may that continue! The reserve is currently looking very bright with plenty of greenery and yellow flowers  in evidence after better rainfall recently than in the previous two years – not quite what I was expecting for my first Southern hemisphere Christmas, but good news for the meerkats! There are plenty of new pups emerging at regular intervals, and my general impression is that all animals are in good physical condition. I shall look forward to updating you during 2014 on progress. I shall be at the project site until March, and then will be returning to the UK to plan the next stage of investigations.