Tragic happenings occurred with Gold Diggers this month.  Following the infanticide of three pups by pregnant subordinate female BMO (VGDF020), the remaining pups from three litters were abandoned when the group moved burrows.  Infanticide is discussed in this month’s Meerkatter.   Female dominance is still unsettled in Gold Diggers.

On February 3rd, Hakuna Matata left their usual territory for a neighboring farm where they cannot be followed.  Volunteers are checking their known territory on a regular basis for their return.

Elrond’s Council 2 is now officially a group and renamed Alba, Alba is the Scots- and Irish-Gaelic name for Scotland.  This group name was submitted by a Scottish meerkat volunteer and won the vote!

Make-e-Plan 4 is also now an official group and is renamed Brussels Sprouts.  Female dominance is unsettled between Arabella (VMPF035) and Vivienne (VMPF038), the only two adult females in the group.

Yet another meerkat is showing signs of tuberculosis at Namaqua.  Yearling 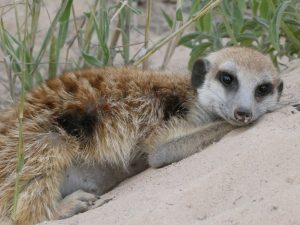 subordinate female Megara (VNQF020) was observed to have two small submandibular lumps and is losing weight.