The concept of “burrow sweeping” to find uncollared groups is explained in this month’s Meerkatter. 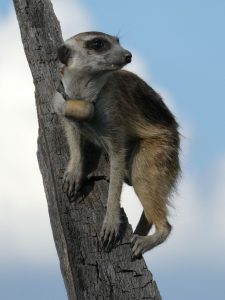 In Brussels Sprouts, Arabella (VMPF035) was collared assuming she was the dominant female since the only other adult female in the group, Vivienne (VMPF038), was seen submitting to her.  Following an inter-group interaction with Gold Diggers, the group split with Arabella, Vivienne and two pups still present.  The whereabouts of dominant male Shandy (VHMM023), subordinate male Gurke VHMM036 and the other three pups is unknown. 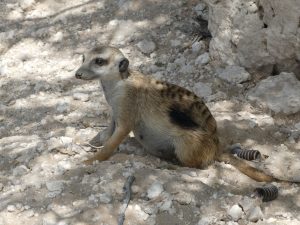 Former Elrond Council dominant female Galadriel (VECF032) disappeared from the group on the 4th and has not been seen since.  Shortly before taking over dominance at the end of the month, yearling female Calypso gave birth to three stillborn pups and has been in poor health since.

Hakuna Matata were only seen twice this month as they have been spending most of their time on a nearby farm that cannot be visited.  The good news is that when they were seen last, they had four pups in tow.  Adult subordinate female Azizi (VHMF039) was given her last seen. 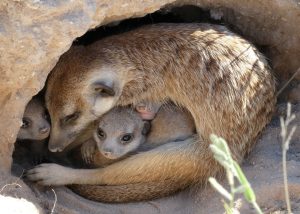 Whiskers increased in size to 21 with the emergence of 6 pups from a mixed litter.  Swift (VWF176) and Brea VLM157 continue their reign as the dominant couple.