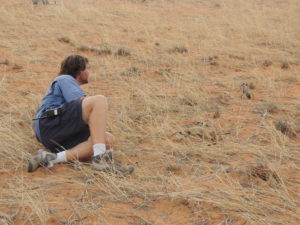 Stuart with Guinness at Jaxx

It’s been six months now since I last updated you with how things were going with the tuberculosis research. At that point I was in England planning for the main stage of my research and working out how best to tackle our questions. Now I am back out in the Kalahari putting plans into action!

During my time at home I had chance to keep up to date on the latest research in both TB and meerkats. I attended an international conference in Cardiff on tackling TB and was able to chat with other researchers who are working on this disease both in livestock and wildlife. This was a really useful chance to meet people and share ideas. I presented a poster at the conference outlining my research plans, which gave me the opportunity to discuss the work with a range of delegates. Following on from this, I was invited to a research station in the UK where a long term study of TB in badgers has been taking place for over thirty years. I went out with the sampling teams to compare their testing strategies with my own. Broadly, our approaches were very similar, but I was able to pick up some pointers whilst I was there which I think will help me, and the presentation that I gave them on the meerkat work led to some interesting discussions. I also took the opportunity to go to Cambridge for the annual Meerkat and Mongoose meeting and hear about all of the research that is currently taking place in these species.

Whilst spending time with the meerkats and obtaining the samples is always very enjoyable, there is an added excitement when a set of results come in! Last season I wrote about the difficulties that TB presents when it comes to diagnostics, and two tests that were under development. I was able to run samples from 80 animals through a new antibody test – the interpretation of those results is still being considered, but all indicators were that this would be a useful test and that the samples had all run properly. This season I have a second test which I will use alongside the first, looking at different indicators in the blood. This test has been developed with colleagues at Stellenbosch University, and looks for markers of TB that would be expected to show up at an earlier stage than the antibodies in the first test. Again this test has been run on a set of samples that I have collected this year, and is running well. At this stage the results have to be interpreted very cautiously, but I would estimate that around half of the meerkats in the current study population have been exposed to TB at some point in their lives. This is not as bad as it sounds, as the disease progresses slowly and so most of these animals will never show signs, but it is an indicator of how much infection there is within the population.

My second field season started in September this year. I am now working on the vaccination strategy trial. I have found no suggestion anywhere that anybody has ever vaccinated meerkats against TB before, so we have had a world first at the KMP – we now have 5 adults and 3 pups vaccinated which is very exciting! In three groups we are vaccinating those animals who make the greatest number of risky contacts for disease spread – Julian’s previous research suggest that these will be the  dominant individuals. In another three groups we are vaccinating pups at emergence to see whether protecting the most susceptible animals is better for the group as a whole. A further three groups are being followed as controls. Samples will be taken from all of these groups every three months to monitor the transmission of infection – this work has already begun. 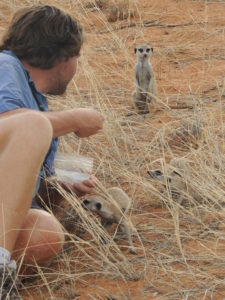 Stuart and Guiness (the most distant meerkat…)

One of the challenges of this study is that very specific animals are required for vaccination – I can’t pick the easiest animals to catch! Unfortunately two of the dominant males that I need to vaccinate for this work are wild-born and not fully habituated! This has led to an interesting few weeks! Fortunately Sky and Lyndsey, the project managers here, are very experienced in working with the meerkats and have been able to catch one of these guys for me with no difficulties. The second, Guinness is proving more difficult and I am spending a number of sessions each week working on his habituation prior to capture. This is involving spending time with him when he is foraging, and getting him used to me being close by. I like to think that we are developing an understanding – mainly lubricated by a good supply of boiled egg and the occasional scorpion! – and I hope to be in a position to vaccinate him in the next couple of weeks. Currently he is progressing well, and has started to climb in the weights box on a regular basis and is accepting of close proximity. In the meantime it is a good excuse for getting out in the field, watching the meerkats, and getting to know at least one personality very well!

In sadder news, Friks Army continue to have problems with clinical TB and the group has suffered a number of losses recently. I hope that the group can survive their current problems and will thrive again as they are always a good group to visit. Similarly, difficulties continue at Mayans, and Attenborough is doing a valiant job, at a young age, of holding together a group that has suffered severe losses over the last year. It is a reminder to me of the importance of the work that we are undertaking, as it affects everyone out here when individuals that are well known to the project are lost. 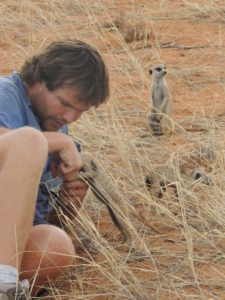 Stuart getting robbed while trying to lure Guiness in

Going forwards now, I am planning to stay out at the KMP for the next few months to continue with the vaccinations, and I will soon begin my second round of sampling for the season. It is going to be very interesting to see the repeated blood test results on individual animals and how they change over time. I will of course update you on my progress with the work, and I’ll late you know how my friendship with Guinness develops!