Ash (top), Koda (showing his back) and Poletje (hiding underneath somewhere), of the Jaxx group.

I have just been reading over my last report and reminding myself how the TB research has moved on in the intervening period. Summer 2014/2015 for me was about getting the central study in my PhD up and running: the vaccination project. There were a few hitches along the way but I think that we got there!

The study is designed around nine social groups: three where all newborn pups are vaccinated, three where we vaccinate those animals who have the most social contacts, three receiving no vaccination who serve as a control. Over a two year period I hope to see differences in the level of infection between the groups.

The crucial issue for this trip was to get vaccinations into those study groups. Readers of my last entry may remember one of the difficulties with this: Guinness! Guinness is the dominant male at Jaxx, and I have to confess, my favourite (I know that I shouldn’t have a favourite!). I spent a lot of sessions last year trying to persuade Guinness to allow me to get close to you, and we built up a wary trust over time. It was around Christmas time that I felt that I could get close enough to catch him: I was wrong! I have to thank the capture team at the KMP for their patience as Guinness’ capture ended up requiring four trips to Jaxx! That’s three lie ins that I deprived my colleagues of! As if sensing that our relationship had taken an unexpected turn for the worse, my friend had suddenly decided that although he wasn’t nervous around me, he wanted to maintain a respectable distance. I wasn’t able to get close enough to even attempt a capture. Finally the day before New Years’ Eve, he let his defences down and we managed to give him his vaccine. Given my previous difficulties, project manager Lyndsey had settled down at the car for a relaxing morning and was most surprised to see me returning almost immediately with Guinness – but it was a good job that she was there because my hands were shaking so much at that point that I needed help administering the anaesthetic!
As a footnote I was relieved to find that later that morning Guinness came to my call and took food from me – I seemed to have been forgiven.

When I left the fieldsite in February I had vaccinated the dominant animals, those making the most aggressive contacts, in my three treatment groups. I now have to watch these groups carefully in case there are any changes in group structure.

I am focusing on pups with my other vaccinations as we believe that these are the animals most susceptible to acquiring infection. I have all pups vaccinated in two groups, despite groups not necessarily breeding quite when I would like! Taking a particular interest in pups makes you pay far more attention to the timing of litters! Unfortunately you will know by now that Friks Army are no more; and they were to have been my third pup vaccination group. Like many of the Friends, I am very sad to have seen this group go as they were such a pleasure to visit. The large size of this group last year, when many other groups were so small, meant that there were lots of interesting behaviours to observe, and a fair few characters emerged. Unfortunately TB has really taken its toll on this group over the last twelve months; the rate of decline has been dramatic. No pups were born here at all over the breeding season as group health declined. On a positive note, I have managed to collect a number of blood samples from this group, and these have been possibly the most important samples that I have for developing a new diagnostic test for TB in meerkats. I am currently writing up these results for publication with collaborators at Stellenbosch University. I hope that these findings will mean that despite their own demise, Friks Army have made a big contribution to our ability to control TB in our meerkat population.

I was pleased to have Julian Drewe visit me just before Christmas – and not just because of the toffees and newspapers from home! Julian has been supervising me since I began the PhD and it was a useful as well as reassuring few days to be able to show him how the fieldwork was progressing and to discuss how to carry the work on. I think that he enjoyed the opportunity to come back to the site and see what changes had taken place since he was last out there for his own PhD study on meerkat TB. 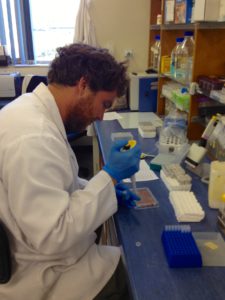 The behaviour of the tuberculosis bacilli provides diagnostic challenges different to those of other bacteria or the viruses. Diagnostic testing is notoriously difficult, especially in the early stages of infection and this is why I am using the common tactic of combining multiple tests on a sample drawn from the same animal. One of these tests, known as a cell-mediated test, is being used in the field for the first time this year. This new test is the one that we have used samples from the KMP to develop – I wrote about this last June. This is the first time that a blood test has been used specifically designed for use in meerkats. I am using this alongside a cattle antibody test (mentioned previously) and bacterial culture methods.

So what now? I’m currently enjoying the London early Summer (I have missed out on an English Winter for the second successive year) and getting some written work done. I’ll be back out in the Kalahari in July, August and September to experience my first South African Winter. During this time I will be topping up vaccinations in the study groups where necessary, and carrying out my third round of sampling. The nature of my study design means that repeat sampling is very important – it is the change in a group’s infection status over time that will be of interest.

The samples are mixed with various reagents, and a colour change can be seen. The intensity of the colour is measured and compared to a reference range. The level of colour change indicates the density of antibodies bound to the plate and is used to gauge the immune response to tuberculin.

I continue to be grateful to the support that the Friends have given me in this work, and to those individuals that have made additional donations to my project through this website – everything goes towards funding the fieldwork, the main cost of which is the cost of the diagnostic reagents that I use when testing the samples. If anybody has questions about the work or tuberculosis in the meerkats then I would be happy to discuss the project. Just send me an e-mail at Spatterson (at) rvc.ac.uk