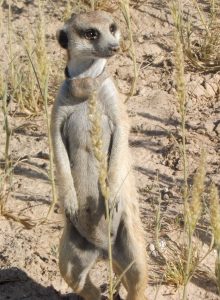 October’s Meerkatter features a discussion on meerkat pups and heartwarming accounts of the return of missing pups.  There was much pregnancy drama with Jaxx this month, that ended with pups being born to Jaxx females, other than dominant female Baloo (VJXF080), for the first time since 2016. 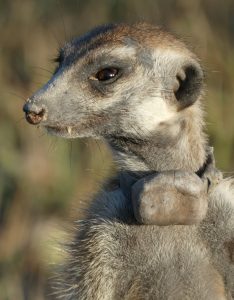 Ubuntu dominant female Daisy (VBBF111), and one of the stars of Meerkat Manor: Rise of the Dynasty, was found predated.  While the details are not known, Daisy had been losing condition in the preceding months and this may have made her an easy target for predators. 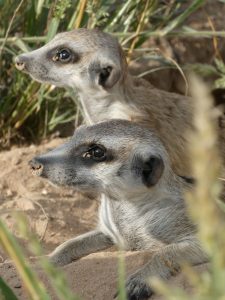 Namaqua Luisa and Mia in 2022
Photo by Laura Salamone-Maiden

Tuberculosis continues in Namaqua.  Both dominant female Manzai (VNQF013), and subordinate female Mia (VNQF027) are showing signs of TB and it is suspected that missing Luisa (VNQ031), has succumbed to the disease.

Luna has settled in as dominant female of Whiskers since Swift’s (VWF176) passing last month.  Elderly Brea (VLM157), has remained in the group as dominant male for the time being. 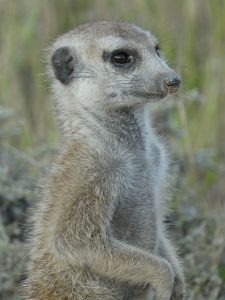