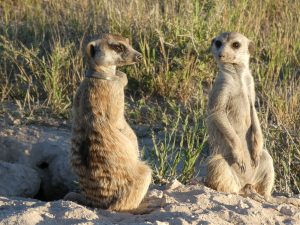 September was a noteworthy month for the Whiskers with both highs and lows. Dominant male Brea (VLM157) turned a record 13-years-old, making him the oldest meerkat in the history of the KMP.  He looks a bit worse for wear these days, but he is hanging in there! Sadly though, his long-time partner, dominant female Swift (VWF176), passed away of unknown causes shortly before his birthday.  Swift’s adult daughter Luna (VWF235) took over dominance.  Without Swift, and Luna likely being Brea’s daughter, Brea’s future in Whiskers is now uncertain. On an encouraging note, for the first time in 6 months, there are surviving pups in Whiskers from a mixed litter of Laika’s (VWF236) and Flake’s (VWF247).

Former Trackie-Daks dominant female, Whiskers-born Bel-Hurricane (VWF231), resurfaced after disappearing in early July.  While she has not re-joined Trackie-Daks, she is sticking close by.

Swift’s son, Alba dominant male Jay-a-Rod (VWM216), was assumed to have been predated.  His radio collar was found in a bird of prey’s nest.  Alba dominant female Pippin (VECF003) was given her LAST SEEN this month as well. 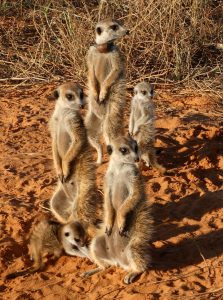