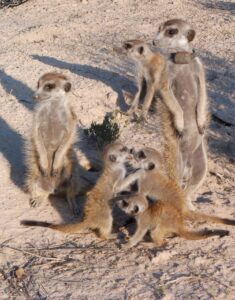 This month’s Meerkatter highlights Make-e-Plan on the group’s four year anniversary.  This group was created by two Qunitessential females Bridget VQLF011 and Heatherleigh  VQLF018, and Zulus male Pi VZUM006.  Early on, this group was exposed to tuberculosis when two of the three Van Helsing males that immigrated into the group after dominant male Pi was predated, were infected with the disease.  Since the passing of these two males,  Make-e-Plan has been TB-free,  Current dominant male Banksia VVHM117 was the third Van Helsing male who immigrated into the group.  Banksia is the sole remaining individual born into Van Helsing.  Bridget has remained dominant female since the group’s inception whereas Heatherleigh went on to become dominant female of Namaqua. 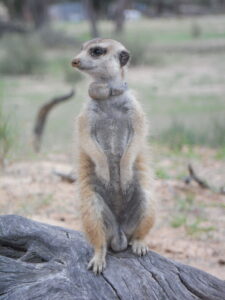 Gold Diggers had a setback in their habituation due to an unmarked wild female yearling emerging with the group one morning.  There is still no clear dominant female or male in the group.

Four of the five Lazuli pups that emerged last month are assumed predated.