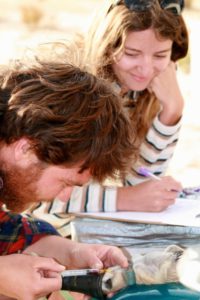 Taking a blood sample at Uberkatz; one of the many samples that I obtained thanks to the help of the KMP meerkat managers. On this occasion, I was working with Lyndsey, who can be seen watching over proceedings here.

It’s nearly eighteen months into the targeted vaccination study now, and I’m out in the Kalahari going over what has been happening with the population over that time. I’m particularly interested of course in those groups that I have been allowed to work with over this time, but you can’t live here and not pick up news about what has been happening at every other group as well!

This morning I was out at the Baobab group doing some routine sampling with Laura when an excited call came over the radio. The gist of it was that we had been blessed with 0.2mm of rain overnight! It certainly doesn’t sound like a lot, but as many of you will know, this has been a tough time for the KMP population – they’ve really struggled to cope with drought conditions in the region, and we are all watching each and every cloud with a great measure of hope. I am reliably informed that when January rains fail, that March is usually the saviour. So let’s see…

I mentioned that I’d been looking at the groups. Sadly, 7 of my 9 study groups have diminished in size since this time last year, with the other 2 remaining fairly static. I’m learning valuable lessons about the importance of stability in a social system for a targeted approach to disease control and hopefully this is something that will form one of the outputs of my PhD.

Regular readers will recognise Guinness as a regular feature of this update! As the dominant male at Jaxx, I was keen to include him, and spent around four months gaining his trust before I was able to get close enough to catch him for sampling. We think that dominant animals have a key role in transmission of disease due to the nature of the contacts that they have with group members, and so these samples are particularly important. All was forgiven (I believe) as he surrendered to a subsequent capture in August, and I’m hoping will be in generous mood again next week…. I doubt that he sees it as being in his own good, but I can hope. He has maintained his dominance and is personally doing well. However, his family have diminished from 17 in November to 5 this month; hopefully a temporary blip! A number of the males from this group have decided that it is time for a change and have moved into the neighbouring group, where they are currently figuring out the issue of who is dominant. Hopefully they continue to thrive there, and Jaxx will replenish themselves over the next few months. 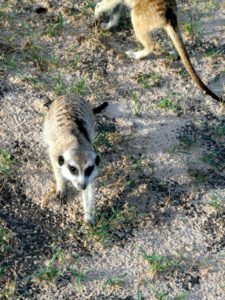 The new dominant male at Pandora in the last week of February. This picture was taken at my latest habituation session with the group. Although, clearly wary, he can be seen approaching me to investigate…. progress indeed!

The problems with Guinness arose because he was a wild male that had come into the population and taken dominance. He just so happened to have done it at a group where I wanted to vaccinate the dominant male. Alas… just over a month ago the same thing happened at a second group that I was interested in. Two (initially three) wild males have joined one of our study groups, Pandora, and have seemingly evicted all the resident males, including the dominant. So…it’s back to work on habituation for me, as it is important to my work that we know the health status of these animals as early as possible. If they were to develop disease in the future, it is good to know whether this was something that they arrived with, or that they picked up at their new group. The project volunteers are helping too and doing a great job. The two new guys don’t have official names yet (but unofficially of course they have – I have to call them something!!), but I can report that I have now managed to get dye marks on them, and got them on the weights box. They are now taking egg from the volunteers, and I hope that at least one of them will be weighable on a regular basis very soon. I have three visits there in the coming week; this is very much a work in progress.

Vaccine itself was a bit of an issue as I planned this latest trip towards the end of December. I was faced with an international shortage of BCG (the vaccine that I use, and is also used in humans, badgers, and several other species). Fortunately, a South African contact came good, and in February I received enough doses to see me through the remainder of the project. I know many readers of Jules’ life history reports to the Friends are anxious for news of pups in the population, and I am very much in the same boat. There have not been pups for several months now, but I’m hoping that that will change soon and I will be able to restart vaccinating youngsters.

The key benefit of vaccination as far as my work is concerned is that we hope that it will slow disease development to the extent that infected animals either reach an infectious stage much later in life, or never at all. So the real benefit would actually be less new infections in non-vaccinated animals, as there would be less transmission. However, a benefit to the recipient of the vaccine is also highly desirable, and I can report that so far, of the 23 meerkats vaccinated as pups since Sep. 2014, none have gone on to develop signs of disease. It’s far too early, and too few animals to read much into that, but it’s a good start!

I wrote last time that I had been visited by my supervisor, Julian, and since then I have received further visitors! I have been fortunate enough to receive immense support from the Animal TB group at the University of Stellenbosch, and in September, my collaborators Sven and Charlene made the journey from the Western Cape to see where all the samples were coming from – they were also kind enough to give me a lift back to Cape Town which made my life a lot easier. I carry out all of my laboratory work with this group, and we are currently working together to write up our progress with the development of a diagnostic test for TB in meerkats. I have written about this test previously, and progress continues to be encouraging. I think that both Sven and Charlene enjoyed their time here and were impressed by both the smooth running of the project, and the personalities of the meerkats that they met. 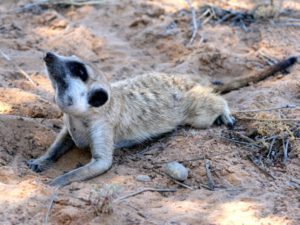 Bruce was euthanased the day after this photo was taken at Rascals. The swelling of his submandibular lymph node is very clear in this picture, something that he had been fighting off for several weeks. We hope to learn more from him about how early our tests enable us to detect infection, as we were able to take several samples from Bruce over his last 18 months of life, long before his symptoms started.

Their visit coincided with the first cases of TB I had seen in my three-month visit. Obviously of interest for TB researchers, but otherwise a sad development. We’ve recently seen cases at Drie, Rascals, and Axolotls. Both my experiences, and my research in the database, suggest that the social group is very important in TB transmission. It seems to be relatively difficult for infection to jump from one group to the next but spreads much more quickly within the group. We have taken samples of all the infected and uninfected animals at these groups, and that gives us a good base line to learn about the speed and manner that infection spreads.

Six months from now I ought to be coming to the end of my last sampling season. By that time I hope to be able to update you on my friends at Pandora and their successful habituation. I hope to have had another successful season collecting field samples and processing them in Stellenbosch. And I hope to be able to start to give you a few more ideas about how this disease spreads in the meerkat population and some evidence as to how we might be able to control it. Thanks again for all of your support – I couldn’t do this project without the generous support of the Friends, and it’s truly appreciated.