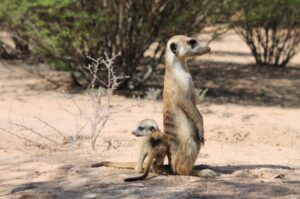 New subgroup Lazuli 3 was renamed ‘Aristokats’.  Since none of its members were seen as pregnant, it is suspected that the two-week old pup that turned up with the group this month was stolen from the most recent Jaxx litter.  The longevity of Aristokats is tentative since its few member keep coming and going in and out of the group.  Time will tell if this new sub-group sticks around.

In Jaxx, five pups born to dominant female Baloo VJXF080 emerged and have been foraging with the group. 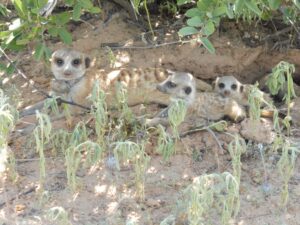 Namaqua continued to have losses due to tuberculosis.  Quarrel VNQM010 has not been sighted since last month and is considered Last Seen.  Dominant female Heatherleigh VQLF018 did not emerge with the group on the 3rd and has not been seen since.

One pup was seen in the new Phoenix group, bringing the total members to 15.  Habituation level in In Progress.