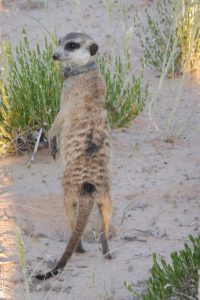 Habituation is discussed in this month’s Meerkatter.  The habituation process is still underway at Gold Diggers, Trackie-Daks and Phoenix.  While Phoenix still needs the most work, a volunteer saw an opportunity  to have direct contact with the three new Phoenix pups when the babysitters went off foraging.

Jaxx dominant female Baloo VJXF080 aborted her litter, as did the Namaqua’s dominant female Manzai VNQF013 and Ubuntu subordinate Magali VUBF023.  While births were confirmed at Gold Diggers, Make-e-Plan, and Trackie-Daks, pups never were seen to have emerged.

Make-e-Plan dominant male Banksia VVHM117 went missing around the 15th and hasn’t been seen since. Runaways subordinate female Brownie VRWF003 was given her last seen. 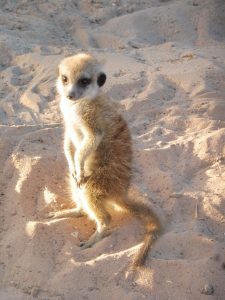 Namaqua Hiccup as a pup in 2020. Photo by KMP visitor Laura Salamone-Maiden

by means of a submandibular lump.

The current territories chart can be found here.