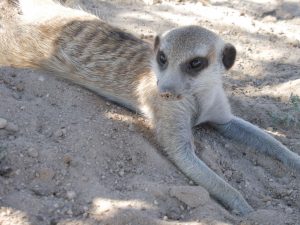 October was marked by pup losses.  Among those, one pup from Elrond’s Council dominant female Galadriel’s (VECF032) previous litter, all three pups of Lazuli dominant female Sigma (VLF230) either dead or missing, and all pups from Phoenix and Zulus have not been seen since last month,  Make-e-Plan dominant female Bridget’s (VLQF011) pups never emerged.

A new subgroup formed consisting of Make-e-Plan subordinate females Vivienne (VMPF038) and Arabella (VMPF035) and Namaqua adult Male Zuko (VNQM012) and yearling male littermates Barney (VNQM018) and Cooper (VNQM019).  No dominance has been decided.  Temporarily dubbed Make-e-Plan 4, the group will become official and be given a new name if they stay together for two more months. 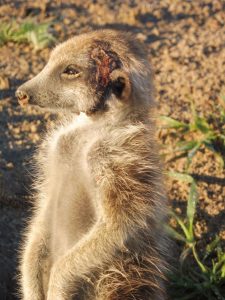 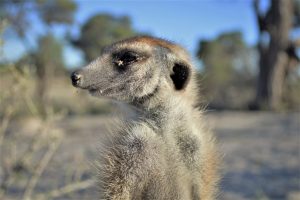 Namaqua’s Hiccup (VNQF016) has more advanced TB symptoms now, including submandibular lumps on both sides, coughing and emaciation.  No other individuals in Namaqua are showing signs of TB at this time.

Roving behavior is explained in this month’s Meerkatter which can be found here.