This month’s Meerkatter features the goings-on with Trackie-Daks.  Dominant female BB (VTDF010) was given her last seen after disappearing in late October.  Adult subordinate male Sketchy Bongo (VTSM019) emigrated into Make-e-Plan. Several other Trackie-Daks individuals were also given their last seen and by the end of this month the group was down to 10 individuals from 16.  Adult subordinate male Sushi (VTSM006) has been displaying dominance behaviors at Make-e-Plan as dominant male Banksia (WVHM117) has yet to resurface and has been given his last seen.  Female dominance in Trackie-Daks has not been sorted out among the two remaining females, Fergalicious (VTSF020) and Tara 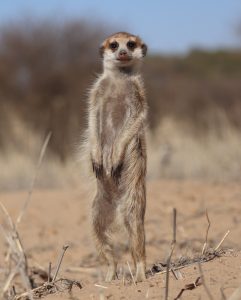 Only one pup remains out of four born to Elrond Council’s subordinate female Pippin (VECF003) in late October.

Dominant females from Elrond Council, Gold Diggers, Jaxx, Lazuli, Namaqua, Runaways, and Side Quest are all pregnant or gave birth this month.