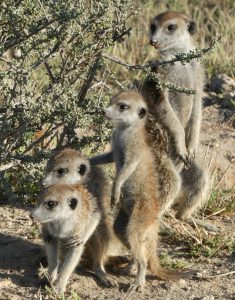 Ubuntu Artemis with pups including Donut.
Photo by Laura Salamone-Maiden

An overview of the previous pup birth record in Ubuntu and other happenings in the group are highlighted in this month’s Meerkatter.   There is a new dominant male after the death of Jumper. 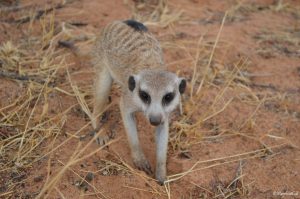 Shandy in 2018.
Photo by Shaz Alderton

Hakuna Matata were seen three times this month but still spending the majority of the time on a nearby farm. Fourteen individuals were seen.  One of the sightings was an intergroup interaction (IGI) with Whiskers.

After last month’s abandonment of the Make-e-plan pups, 9 of the 15 pups born into the mixed litter were given their LAST SEEN.

Namaqua did not have much of a reprieve from TB.  Yearling subordinate Hanspeter VNQM029 is now showing visible signs of the disease. 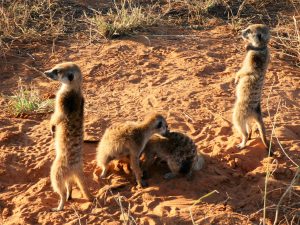 The Group Territory Map can be found here.