This month a subgroup of Lazuli, Lazuli 2, formed but was short-lived.  Annie (VLF240) and Lennon (VLF246) left Lazuli on the 10th and a few days later they were seen moving one of the dominant female Sigma’s (VLF230) pups to another burrow 500 meters away.  The following day, Hakuna Matata rover, Shandy, (VHMM023) was at the burrow with the Lazuli girls and the pilfered pup.  By the end of the month, Annie and Lennon and the pup had returned to Lazuli. 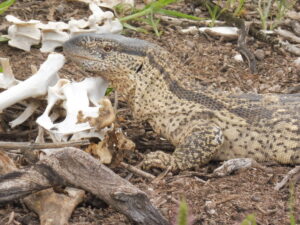 Make-e-Plan dominant female Bridget’s (VQLF011) six pups born last month were not seen after being left in a bolt hole while out foraging with the group.  It is suspected they met their fate to a rock monitor lizard seen in the area.

Vivienne (VMPF038) was found to have injuries to the face and 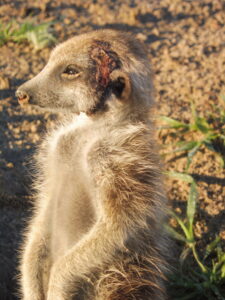 head consistent with a snake bite.  She is recovering well.

In Zulus, there is an unknown number of pups in the burrow as three subordinate females – Lentil (VZUF032), Li’l G (VZUF029) and Timon (VZUF049) – all gave birth this month.  Four have been seen in the burrow entrance.

The March 2020 Meerkatter can be found here. 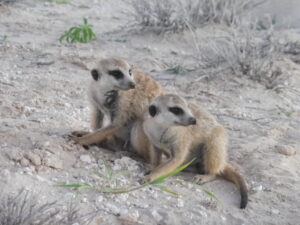 For the first time in four months, Zulus has a dominant male.  After ongoing battles amongst the three Whiskers – Pixie (VWM201), Scuzi (VWM213) and Jay-a-Rod (VWM216), Scuzi emerged the victor.

Elrond Council Smeagol (VECM006) was thought to have been bitten by a puff adder, suffering a severe forearm injury, labored breathing and fatigue. He had difficulty keeping up with the group. By the end of the month, he showed significant improvement and is expected to recover fully.

Habituation of the wild individuals at Lazuli is progressing well.

Namaqua Heatherleigh (VQLF018) gave birth this month but only one pup was seen emerging.  It is possible that other pups were killed by a monitor lizard that had been seen in the babysitting burrow.  Bonnie (VWM209) was given his last seen.  He had been displaying signs of TB in January when he was left behind by the group. 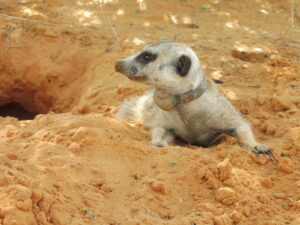 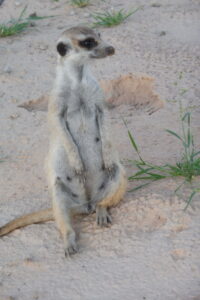 Immediately prior to the filming of the new season of Meerkat Manor, Lazuli’s habituation status changed as a result of three wild males immigrating into the group.  For this reason Lazuli could not be filmed and was replaced by Ubuntu.  Life History information can now be provided on Lazuli but not on Ubuntu for the time being.

There is still no clear dominant male in Zulus.  Pixie (VWM210) was observed submitting to both Scuzi (VWM213) and Jay-a-Rod (VWM216). Pixie is sporting a nasty neck wound. 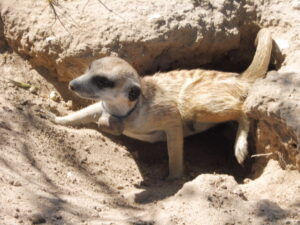 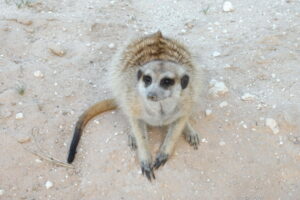 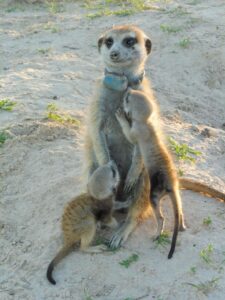 This month brings the best news and the worst.  The good news is that the Oxford Scientific film crew will be returning to the KMP to gather footage for the next iteration of the popular television show, Meerkat Manor.  Approximately six months of filming will begin next month. The new season is expected to air in 2021 or early 2022.  In order to avoid any spoilers, information on the three groups to be filmed – Whiskers, Lazuli and Hakuna Matata- will not be published in future Meerkatters and Life Histories, but may be at a later date.

The bad news is that Polon (VJXM095), beloved dominant male of Lazuli was predated on the 13th of this month.  His life story is featured in this month’s Meerkatter.  At eight months old, Polon became the youngest dominant male in the project’s history.  He fathered 28 individuals during his reign.  Polon was an endearing character and will be greatly missed.