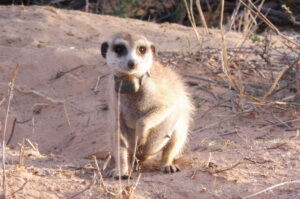 Throughout March Whiskers boys, Bonnie (VWM209), Clyde (VWM208) and Cleo (VWM205) continued to fight for dominance in Namaqua.  Bonnie received the brunt of it by sporting a nasty lacerated and swollen face.  Lewie (VLM208) had enough and viciously fought with Cleo and Clyde, regaining his dominance.

Zulus dominant female Poma (VZUF007) gave birth mid March but due to a possible threat in the burrow, the pups were brought out just days later and moved.  Poma emerged from the burrow with lacerations and swelling, most likely due to snake bites.  Sadly, she succumbed to her injuries over night.  No other females in the group were lactating so Poma’s final litter was lost and dominance up for grabs.

February was marked by inter-group interactions, individual encounters with roving males and evicted females trying to get back into their home groups. Whiskers boys, Cleo (VWM205), Bonnie (VWM209) and Clyde (VWM208) emigrated into the newly formed Namaqua group, fighting Lewie (VLM208) for dominance.

Shamal(VVHM111) took over dominance in Make-e-Plan as the former dominant male, Le Grand Obstacle (VVHM103), was euthanized due to advanced TB. 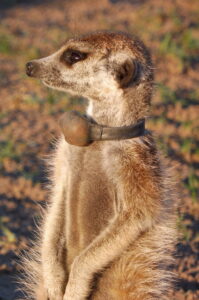 The New Year brings in pregnant sub-adults in Make-e-Plan and Ubuntu.  These naughty meerkats are only 8-9 months old! Little Creatures Kanye (VCRM002) could not make up his mind as to which group he’d like to call home, visiting Run Amuk, Creatures and Jaxx, along with regular excursions back to Little Creatures. Calpurnia (VCRF001) was predated. The Van Helsing mob is still showing signs of TB.  One of Swift’s (VWF176) pups from her latest litter of five was lost after their first forage. The good news is that Swift is officially pregnant.